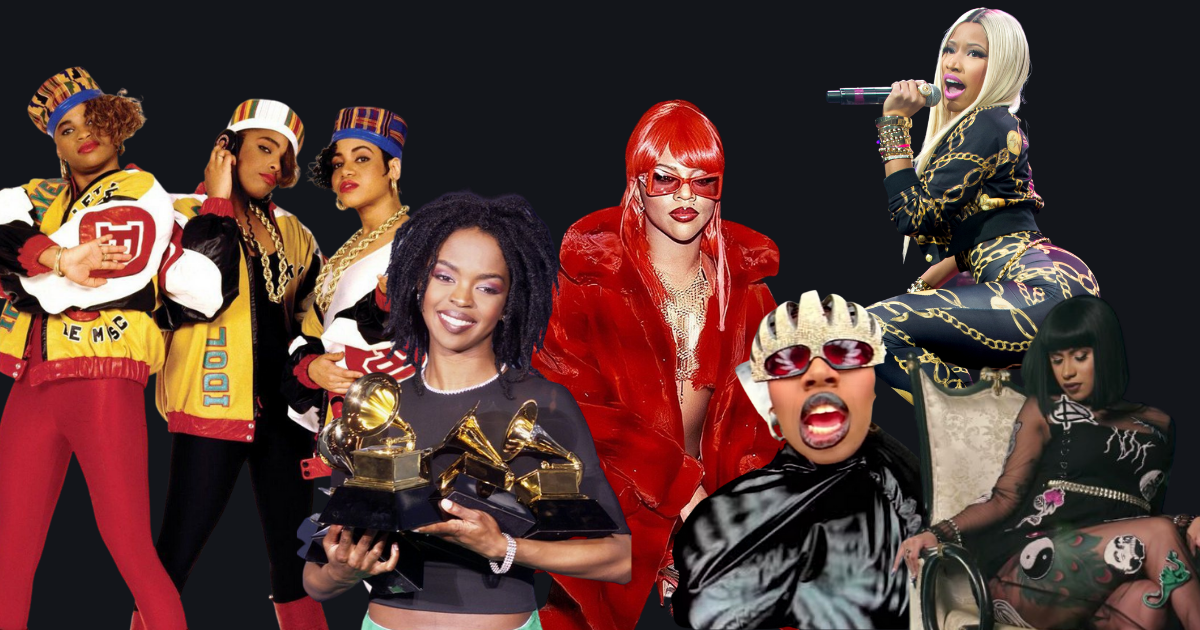 Since its conception, hip-hop has been a male’s playground that unfortunately left women on the hunt for a genre that reflected and respected their beliefs. Enter artists like Salt-N-Pepa and MC Lyte, who weren’t afraid to create the first female-genre invasion!

With March being Women’s History Month, we wanted to look back at the greatest songs from female rap stars who’ve changed the rule of the boy’s club.

In the 1980s, Lolita “Roxanne” Shanté Gooden decided to pick up the mic to bust a freestyle in the Queensbridge projects, and the rest was history. After hearing about the beef between her neighborhood friends and the hip-hop trio U.T.F.O., 14-year-old Roxanne decided to jump in with a track that opposed the group’s hit “Roxanne Roxanne.” “Roxanne’s Revenge” kicked off one of New York’s earliest hip-hop rivalries, the Roxanne Wars. As one of the first female stars in hip-hop history, Roxanne was a killer on the beat and adapted to wordplay easily.

“Ooh, baby baby,” was the world’s exact reaction to Salt-N-Pepa’s 1987 single. Nursing students and co-workers Cheryl “Salt” James and Sandra “Pepa” Denton, teamed up with Salt’s boyfriend at the time, Hurby Azor, to start recording some tracks. Released as the B-side to the 12″ single “Tramp”, “Push It” unknowingly became the most recognized song of hip-hop history. The Grammy-nominated track solidified the duo’s and DJ Spinderella’s position as “The First Ladies of Rap and Hip Hop.”

Born and raised in New Jersey, Queen Latifah entered the music industry as a double-act being gifted with both singing and rapping abilities. She released her first album All Hail the Queen in 1989 and spoke on Afrocentric feminism and gender equality. One of her most popular songs that reflects her beliefs is her collaboration with Monie Love, “Ladies First.” Asserting her revolutionary stance and assisting the push of jazz hip-hop, Queen Latifah continues her reign as a long-standing figure of the hip-hop community.

At a time where male rappers were catching heat for bad-mouthing women, former N.W.A member Ice Cube took a young female Compton rapper under his wing, and her name was Yolanda “YoYo” Whitaker. Featured in Cube’s debut album, YoYo also enlisted the “Amerikkka’s Most Wanted” rapper to join her on her single “You Can’t Play with My Yo-Yo.” In this track, she boldly denounces sexism in the music industry.

The stars aligned when Tionne “T-Boz” Watkins and Lisa “Left Eye” Lopes decided to audition for Perri “Pebbles” Reid’s casting call. The Reids’ quickly signed the duo and added third member Rozonda “Chilli” Thomas to form the Atlanta-based girl group, TLC. The group’s funk-R&B-rap fusion became an instant success after the release of their debut single “Aint 2 Proud 2 Beg.” The trio pioneered the expression of womanhood by showcasing their sensual side and empowering both men and women to have safe sex. TLC flipped the script on what females were supposed to sound and look like in this emerging era.

At one time named “the best female vocalist in hip-hop,” MC Lyte was a young Brooklyn female rapper who was pushing her way into the industry. MC Lyte released her lead single from her fourth studio album called “Ruffneck.” Hardcore and unmerciful, the song was a refreshing reflection on how women can materialize men the same way men do females. Announcing what she wants and what she needs, MC Lyte was finally able to break through the industry’s shadow with this Billboard No. 1 single.

Chicago’s Shawntae “Da Brat” Harris presented her rapping talents to the duo, Kris Kross. Impressed by her lyricism and style, they introduced her to the head of So So Def Recordings, Jermaine Dupri. He immediately signed Da Brat and helped her create her debut album, Funkdafied. The homonymous single was an instant success and provided the record company with one of its most popular hits. Often compared to West Coast’s Snoop Dogg, Da Brat was more than a rapper and looked at as a unique character in the hip-hop industry. Da Brat truly had her own wave, and she was properly rewarded by becoming the first female solo rap artist to go platinum.

Foxy Brown is another New York MC who helped influence hip-hop. As a teenager, she scored features with Case and Jay Z. In 1996, Brown released her debut album Ill Na Na and dropped her single “Get Me Home.” At such a young age, Foxy Brown was able to spearhead the vulgar rap genre with her Brooklyn swag and bravado. Tough and raunchy, Foxy Brown lived up to her rap name and defined a culture of female artistry.

When the larger-than-life rapper, The Notorious B.I.G. needed a headlining female with his same energy and the looks to match, he didn’t have to look too far. Fellow Brooklyn-based rapper Kimberly Denise “Lil’ Kim” Jones was friends with the local legend who took her in as his protege. Along with her Junior M.A.F.I.A. member, Lil’ Cease, Lil’ Kim, released the second single from her debut album, “Crush on You.” Rocking monochromatic wigs and fur coats, the “Marilyn Monroe of Hip-Hop,” became a trailblazer of hip-hop glam! With her domineering voice, scandalous style and lyrics, Queen Bee unapologetically challenged both sexes within the music industry.

Virginia neighborhood friends Timothy “Timbaland” Mosley and Melissa “Missy” Elliott made a name for themselves as a local singer in an all-girl R&B group and a DJ. In 1997, the duo got their chance to fully showcase their talents on Missy’s debut album, Supa Dupa Fly. The standout work on this impressive album, however, was the Ann Peebles sample track, “The Rain (Supa Dupa Fly.)” Missy’s wordflow, sound and unforgettable black garbage bag suit demanded attention from audiences. Ahead of her time, the singer/rapper inspired countless female performers with her creativity and allure.

Gaining fame as the female vocalist of the hip-hop group, The Fugees, Lauryn Hill was already a groundbreaking figure in music. The world was finally treated to L Boogie’s solo debut project, and that album was called, The Miseducation of Lauryn Hill. Her solo single “Doo Wop (That Thing)” kicked off the season of Lauren’s domination and led her to win five Grammy awards, making her the first woman to receive that many in one night.

Bringing her 305-style to the whole world, Trina infamously put Miami on the map with her new female-based sound. Katrina Taylor was founded and co-signed by fellow Miami legend, Trick Daddy. She released her debut album Da Baddest B****. Beyond her suggestive style, Trina was also known for continuously uplifting women and instilling a sense of confidence and sexual pride. She represented the culture well and paved the way for future sex-positive, female rappers like Cardi B and Megan Thee Stallion.

Eve started her career at the most unlikely of places, a strip club. She always kept music in her heart, but ultimately decided to continue rapping full time after a conversation with the then-up-and-coming rapper Mase. She eventually found her way to Yonkers, the home of the Ruff Ryders, and earned a spot as the First Lady of the hip-hop label. She presented non-stop hits for the group and proved to be a force within the industry. In 2001, she released her second studio album Scorpion, and its leading hits “Who’s That Girl” and “Let Me Blow Your Mind”. Teaming up with No Doubt’s Gwen Stefani for a smooth yet empowering duet, the two women made history earning them a Grammy Award for the Best Rap/Sung Collaboration.

For years, female hip-hop took an unwarranted pause due to the industry’s growing misogyny and the fall off of our favorite leading ladies. One woman, however, stepped up to the plate and held down the industry for several years to come. Trinidadian-American rapper, Onika Maraj came out of the Brooklyn burrows swinging hard and demanding a spot in the male-dominated genre. Nicki Minaj switched over to Dirty Money Entertainment, to release her third mixtape, Beam Me Up Scotty, in 2009. The track that set her apart from other artists was “Itty Bitty Piggy.” The animated hit allowed Nicki Minaj to grow into the imposing persona that she is today. Undoubtedly, this era’s reigning queen of rap, Nicki took the crown with this underground drop.

One growing figure was using the ‘Gram to help influence her growing rap career. At the time the exotic dancer -turned-rapper, Belcalis “Cardi B” Almánzar was more known for her social media antics and her large following on Vine and Instagram. Cardi finally proved the naysayers wrong when she released back-to-back hits including the Grammy-nominated hit “Bodak Yellow.” Her Kodak Black-inspired song was catchy and had both males and females following its cadence. This track also kicked off the summer and career of Cardi B and helped her score several acclaimed music awards.

Last but not least is the head Hot Girl herself, Megan Thee Stallion.  By growing her audience via social media, Megan Thee Stallion was able to release several EPs including 2018’s Tina Snow. Her breakout song from the project was “Big Ole Freak.” Smooth yet sharp, Megan’s flow on this track was unmatched and led the hit to become a club banger. She was able to push the lines allowing females to embrace their sexual side and call out men for not giving them what they need.