Black James Franco Takes a Stand Against ICE…You Can Too

On April 20th, 2020 Black James Franco released their first EP in four years. They announced on instagram their alliance with Never Again Action, a Jewish organization seeking the shut down of all concentration camps. They made their EP available for purchase on bandcamp in an effort to raise money and awareness. In two months, the band raised $300, and donated all of the proceeds to Never Again Action. They did a great job, but not nearly enough. What more can we, as citizens, do to help?

WHO IS BLACK JAMES FRANCO, AND WHY IS THIS EP IMPORTANT?

According to their bandcamp, Black James Franco is a “soul” and “experimental” math rock group. In an interview with blueharvestbeat they listed some of their influences “Frank Zappa, King Crimson, and the Mars Volta.” The band is part of Heavy Baby Records and includes Elliot Edmonds on bass, Julio Sanchez on guitar, and Edwin “Eddie” Terrell as lead singer and drummer. They were extremely popular in Denton, TX between 2014 and 2016, and their recent comeback received hella praise from longtime followers. 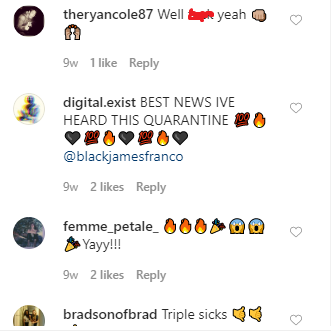 In a brief conversation with lead guitar Julio Sanchez, I found out why Never Again Action was so important to the group. Sanchez says “I [think]…that they are doing great work by actively protesting ICE and…calling these immigration…laws etc for what they are.” Sanchez pitched the donation idea to the rest of BJF, and they were totally on board. Way to use your artists platform for a powerful cause, my dudes!

WHAT IS NEVER AGAIN ACTION?

On the cut and narrow, Never Again Action is an organization seeking justice for immigrants in detainment centers. “We are Jews, immigrants & allies taking action against ICE.” They find parallels between their own peoples in the Holocaust, and the treatment of immigrants held captive by ICE.

So, what do they do? How are they making a real difference? Never Again Action’s most powerful weapon against ICE is organized protest. They, and their thousands of followers, protest loudly to raise awareness of the issue and insight change. What they are doing is incredible. Gathering media attention and utilizing the power of numbers is essential for change. I do, however, believe there are more relevant things they could be doing.

HOW CAN WE HELP?

Obviously, and with a heavy bias toward the band, I say you should buy BJF’s new EP and get a sweet download in the process. Seriously, listen to their stuff. It is super technical and yet deliciously accessible.

Don’t like their jams? (Well, you’re wrong, but I guess I’ll let it slide)  Another way you can help is to participate with Never Again Action to raise money and awareness. According to their twitter and personal website, they often march with protests and parades. Keep an eye out for their actions on Juneteenth, as they have been active throughout BLM.

One of the most relevant things you can do right now is e-mail people in power directly.

Write em an e-mail, and rock on my revolutionary dudes.