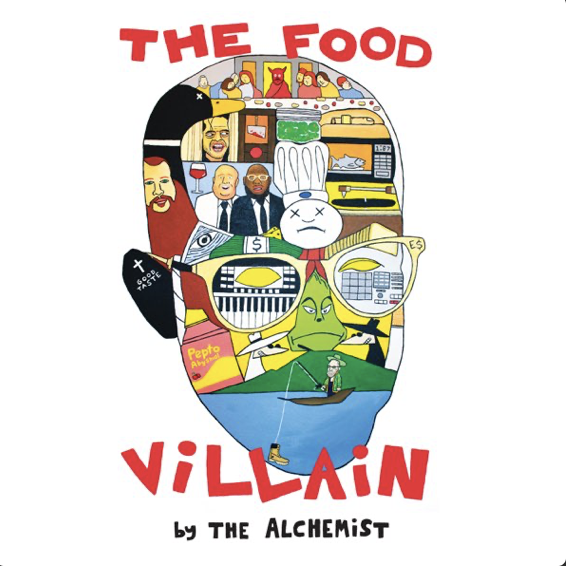 Whenever you have a conversation about the greatest producers of all time, it is without question that The Alchemist’s name will pop up sooner than later.

The legendary producer/DJ has been hard at work this year, producing projects for Freddie Gibbs (Alfredo), Conway the Machine (LULU), and Boldy James (The Price of Tea in China) to name a few.  He also released an instrumental album just a few weeks ago with A Doctor, Painter & An Alchemist Walk Into A Bar, and he’s already back with another offering, The Food Villain.

Riding out tonight. 10/25/20 Art by @theedollarsign THE FOOD VILLAIN. ALCRECORDS.COM

The Food Villain is a collection of classic, sample-heavy instrumentals revolving around a common theme of, you guessed it, food.  Each track features chopped up audio samples from Alchemist’s personal ventures as a regular on Viceland’s authentic international food show, F*ck That’s Delicious with Queen’s rapper and culinary connoisseur Action Bronson.  The Alchemist is notorious for being a uniquely picky eater on the show, prompting him to produce an entire concept album about it.

The smooth, jazzy grooves on “Lamb Sauce” as well as the light, airy keys on “Afterschool” transport the listener to a five-star restaurant on a journey to explore culinary divinity.

Action Bronson makes an appearance on “I Hate Everything” with a hilarious verse written from Alchemist’s perspective.  “No, I don’t want that / I don’t like that / I’ve been around the world, I’m not impressed / Three Michelin stars, I’m not impressed,” he raps over a diabolical yet calm beat that would serve as perfect entry music for a peak 1980’s cartoon villain.

However, the consistency of the chopped audio samples does grow a bit tiresome as the project goes on.  If you haven’t previously dove into The Alchemist’s discography, I wouldn’t suggest wetting your ears with this particular project.  Most of these tracks are delicacies – deep cuts that require the listener’s undivided attention, not meant to be enjoyed by the masses.

The Food Villain Album OUT NOW! ALCRECORDS.COM Art by @theedollarsign

As a whole, the project highlights the depths and nuances of The Alchemist’s unrivaled creativity.  The visceral collage of audio samples, instrumentals, rap, and spoken word create a sort of conceptual charcuterie board for the senses.

The elements come together like ingredients in a fine meal, experimenting with different flavors while weaving in and out of reality.  The Food Villain is best enjoyed in moderation – an authentic buffet of sensation for those with the most refined palates.

Listen to The Food Villain here and be sure to check out more of The Alchemist’s projects.