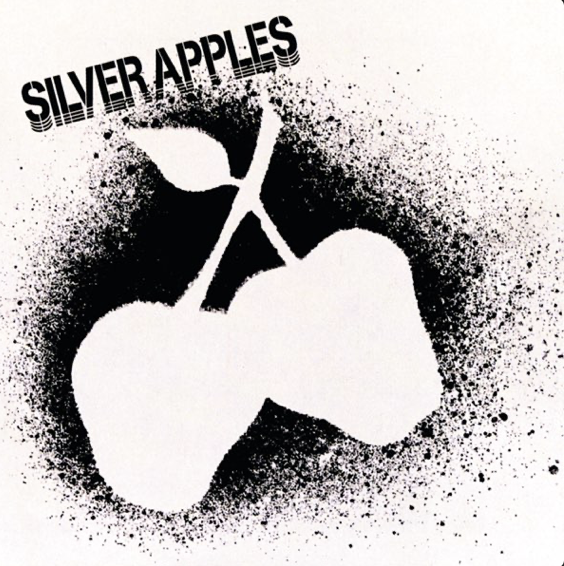 As we know it today, electronic music is a core genre that often crosses over into the realms of pop, rock, and hip-hop as we chart a steadfast path towards genre-less music.

What many do not know is that electronic music was, at first, considered classical and fit for only the utmost pillars of academia.  That is, until Silver Apples, the electronic rock duo of Simeon and Danny Taylor, changed the trajectory of the genre in three short years.

Electronic music influenced pop music throughout the late 1970’s and 1980’s with the widespread adoption of synthesizers, though it wasn’t until the 90’s that electronic music garnered widespread popularity as an independent genre.  The use of oscillators and signal processing in music dates back to post-World War II electro-acoustic musicians and composers.

Canadian physicist and composer Hugh Le Caine curated an experimental soundscape from a single water droplet in 1955 and German composer Karlheinz Stockhausen experimented with synthesized music throughout the 1950’s.

These musicians widely considered their work as classical music compositions engineered for academics on college campuses and theater-goers.  Needless to say, this was a far cry from the smoke-filled bars that mainstream music and, eventually, Silver Apples frequented.

With their authentic interpolation of synthesizers and oscillators – nine audio oscillators with eighty-six manual controls for hands, feet, and elbows, to be exact – Silver Apples and their experimental electro-pop music was vastly ahead of their time.  Drummer Danny Taylor reformed his drumming style to mimic the droning sounds of the oscillators, thereby experimenting with the style of drumming in patterns instead of drumming in beats. 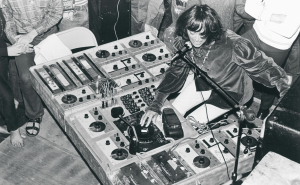 As members of New York’s underground music scene in the late 1960’s, Silver Apples released their first album of the same name in June of 1968.  The project is a mind-altering collection of unstable electronic grooves and hypnotic repetition.  With Motown and the Beatles dominating the charts and airwaves at this time, it’s no surprise that the project did not sell particularly well.  The pulsing rhythms and electronic melodies were enjoyed by rock music’s more experimentally-inclined fan base, and even attracted the ears of Andy Warhol, Jimi Hendrix, and John Lennon.

John Lindsay, New York City’s mayor at the time, became a fan, commissioning the group to write a song for the Apollo 11 moon landing.  They performed the song at their first live gig as a duo, in front of 30,000 people in Central Park during the moon landing watch party.  The futuristic vibe of Silver Apples nestled perfectly alongside what was the pinnacle of human advancement at the time. 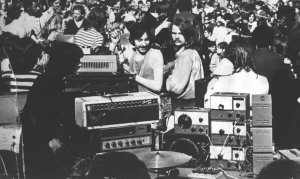 Silver Apples released their second album Contact in February of 1969, possessing a similar aura of cosmic psychedelia as their debut with a newfound intensity.  What made this album widely known was not the music, rather, it was the album art.  The cover features Simeon and Danny Taylor in the cockpit of a Pan Am plane, something Pan Am Airlines agreed to so long as their logo could appear on the cover.

The back cover shows the duo seated amongst wreckage from an actual plane crash with banjos in hand.  Pan Am dropped a massive lawsuit on Silver Apples as a result, which ultimately led to the duo scrapping their third project and disbanding. 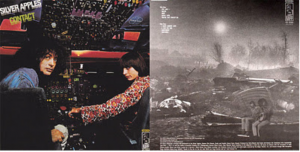 Silver Apples’ sudden disappearance, coupled with their very avant-garde, often unpleasant soundscape, cemented their position outside of the public eye and inside the bowels of music history.  Their discography was kept alive by the spread of underground bootleg recordings, as well as bands like Suicide in New York’s emerging experimental punk scene.  Later on, groups like Portishead, Stereolab, and Spiritualized cited Silver Apples as direct influences on their music.  Think of Silver Apples as your favorite artist’s favorite artist.

Nearly thirty years later after their disappearance, German bootlegs of the duo’s two projects raised their profile greatly, prompting Simeon to reform the group and release new music.  In 1998, Simeon and Taylor completed their original third album The Garden.  Following Taylor’s death in 2005, Simeon continued to release Silver Apples projects by sampling Taylor’s drumming until his death in September earlier this year.

If you listen to Silver Apples debut project today, you’d be shocked to learn it was released over fifty years ago.  Though they are not the first group to sonically experiment in their music, they did it to the greatest degree and tapped into a genre that people would not be ready to accept for several years.  Silver Apples was a surreal, unprecedented duo that shifted the balance of electronic music in three short years.  When you think of the pioneers of electronic music, think of Silver Apples.

Listen to Silver Apples debut project here and be sure to check out more of their music.