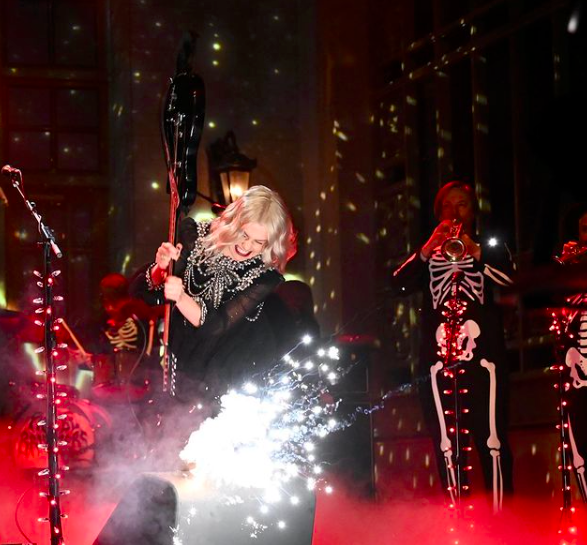 Last weekend, Phoebe Bridgers performed on Saturday Night Live. She sang “Kyoto” and “I Know the End.” She did a good job. That’s where the story should end, right?

Wrong. Somehow, some way, we are still talking about Bridgers’ performance. Why, you ask?

Because she did what rockers have been doing since the beginning of time: she smashed her guitar.

From Kurt Cobain to Garth Brooks, it seems as if every guitar slinger has demolished their instrument at one point or another. However, when Bridgers broke her guitar, the internet lit up with people giving their takes on the situation.

“Why did this woman, Phoebe Bridgers, destroy her guitar on SNL?” Twitter user @mmpadellan said. “I mean, I didn’t care much for the song either, but that seemed extra”

Others chimed in, chastising Bridgers breaking a guitar during a pandemic, when so many are struggling financially. Some said she should have given the guitar to a kid that needs it.

Even David Crosby, of the Byrds and CSNY, weighed in, calling it “pathetic.” A funny reaction, considering his peer group includes artists like The Who and Jimi Hendrix, both famous for the havoc they wreaked, onstage and off.

It’s strange to watch an entire subsection of the internet rush to call Bridgers out for destruction of property or a careless waste of money, all for doing something hundreds have done before. Where was this outrage when Justin Bieber was crashing million dollar sports cars and abandoning pet monkeys in Europe? What about when Bono spent £1,000 on a first class plane ticket for his favorite hat?

The internet is a scary place where people pick and choose what to get up on a soapbox about, but I think we can all agree that this is a situation that is getting way too much attention for no reason at all.

Check out the performance that’s caused all the hubbub here!