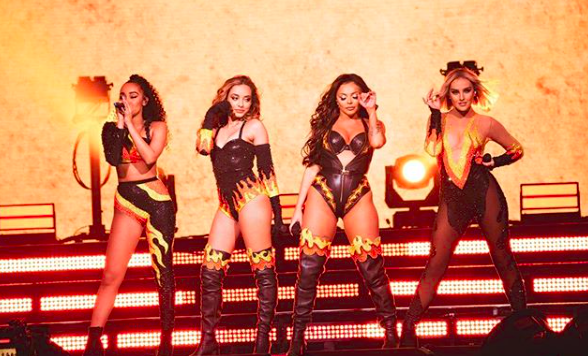 They’ve sold millions of albums, they’ve toured all over the world, they’ve performed with Taylor Swift and been linked to boyband members: so why haven’t you heard of Little Mix?

International artists often talk about how hard it is to break America and Little Mix, X-Factor-winning girl group and mega-stars in the UK and Europe, is no exception. They just released “Not a Pop Song,” the third single off their upcoming sixth studio album, Confetti, and while it will almost certainly go Top 10 in the UK, the odds of it hitting big here in the States is low.

It’s easy to blame the distance, but many British acts have made it across the pond. Others point the finger at industry misogyny. Girl groups pretty much disappeared after the 90s, and even Fifth Harmony’s reign was short lived. Finally, some conspiracists blame the band’s record label. For most of the group’s lifespan, they shared a label with boyband One Direction, which left some fans to theorize that all promotional funds were going their way.

No matter the reason, Little Mix appears to have decided that the UK and Europe (plus their massive Japanese fanbase) is enough. Promo tours and concerts in the US are thin on the ground – I’ve been a fan since 2013 and have only been able to see them perform live twice.

Not A Pop Song is out now! This is just the first taste of what we've got coming on #Confetti... hope you're ready for more 👀 link in bio!

“Not a Pop Song” is a fun, frothy ode to bucking expectations and industry standards for pop singers. By all rights, a hit – it even comes complete with some backstory shade: “I don’t do what Simon says,” the group sings gleefully, referencing their split from Simon Cowell’s Syco Music label in 2018.

Maybe Confetti will be the album that finally gives Little Mix their big break in the US (I hope it does; I want everyone to know I’ve been right about this group for 7 years). But even if it doesn’t, Little Mix will be okay. More than okay, actually. They’ve got every other market on lock; who needs America?

Check out “Not a Pop Song” here!