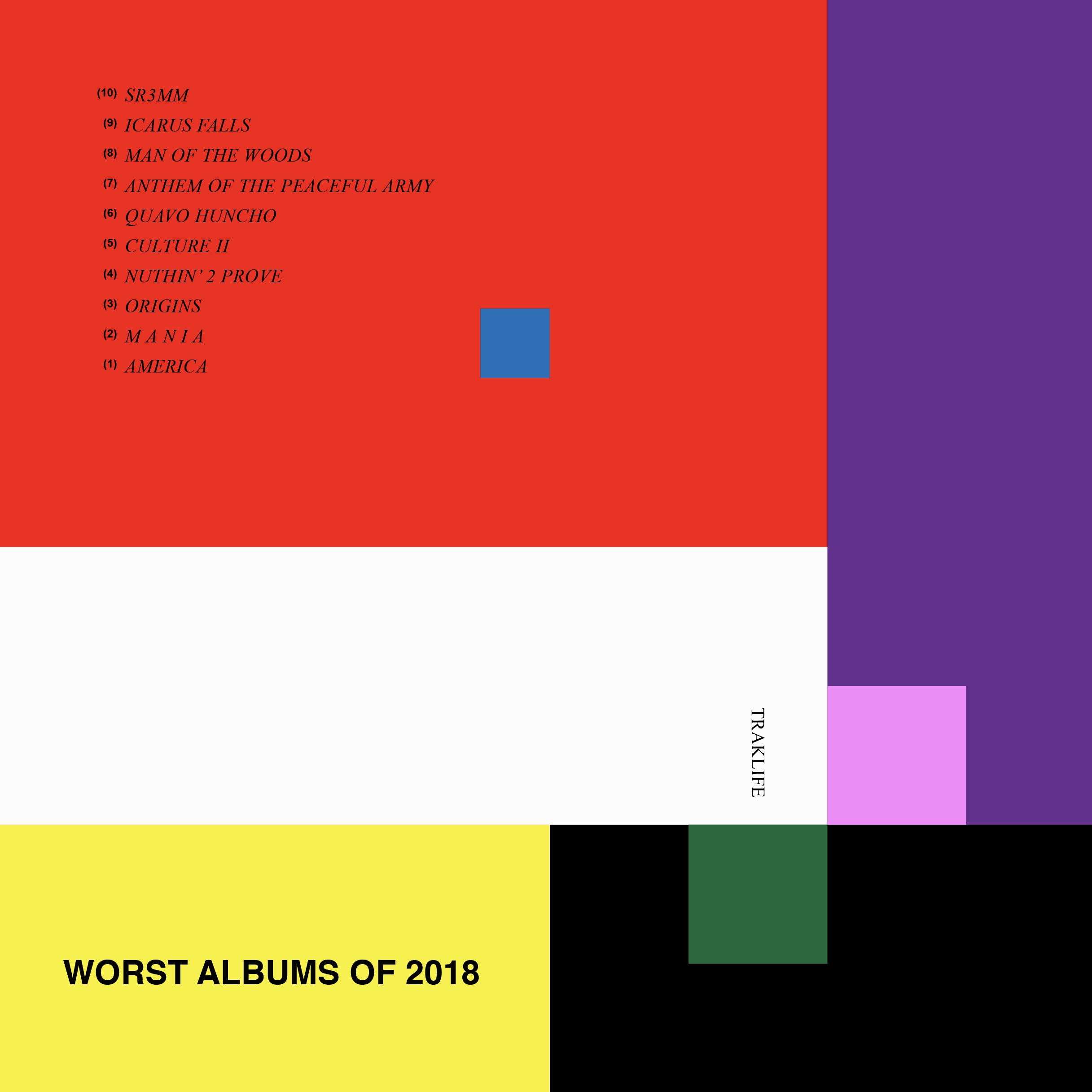 To kick off the new year, we’re first wrapping up 2018 with the worst of the worst. I listened to over 200 albums this year, so obviously I didn’t get to hear everything released this last year, but from what I did hear, there were 10 special albums that caught my attention for all of the wrong reasons.

Why it sucks: Swae Lee and Slxm Jxm decided to “bless” us with a 3-part LP. That’s right. The first part is a full Rae Sremmurd album, which had it’s moments with cuts like “Up In My Cocina” and “Powerglide”, but these highlights are very few and far between on this project. In the age of music streaming, Rae Sremmurd certainly went above and beyond the call of duty with delivering their fans with as many average songs as possible. Next time, maybe take your time to make an album more cohesive and, I don’t know, good?

Why it sucks: Speaking of trying to get those streams, we have yet another lengthy album from ex-One Direction member, ZAYN. 90 minutes of ZAYN solo material. Who the hell wants to listen to that? Sure, there are some decent pop cuts on this thing, but by the 7th song I was already catching myself counting down the minutes until the end of the album. The skip button was getting a lot of use with this album, let me just say. I mean, he has a good enough voice to make solid pop tunes, but please make it shorter… and if you really want to make something this lengthy, you better find different ways to keep the listener’s attention.

Why it sucks: This goes to show that all the money in the world can’t buy you a great album. Justin Timberlake, arguably the king of pop music of my generation, tries his hand at fusing country, hip-hop and pop music on this gross 16-song album. If you’re an avid JT fan, I sincerely apologize, because I really can’t say a whole lot of good things about this album. “Say Something” is the only saving grace here, purely for the Chris Stapleton performance. Other than that, this is an embarrassing performance by one of music’s biggest names. The production and mixing on this album is complete garbage. It truly boggles my mind as to how something like this can happen to an artist as prominent as Justin Timberlake, but it happened to Eminem last year so cheers to that.

Why it sucks: You would think a band would want to eventually stop wearing their influences so heavily on their sleeve to create their own sounds, but apparently not for the Greta Van Fleet band with their latest LP. I enjoyed their debut album quite a bit, but it was because it felt like they took the sounds of Led Zeppelin and Rush and made it more modern, which I appreciated. But this album is simply regurgitating an old’s band style of music, which defeats the whole purpose of being your own band. At that point, just call yourself a cover band. But whatever. This album sucks. In the meantime, I’ll go back to listening to their debut until they come out with something at least interesting.

Why it sucks: Every. song. sounds. exactly. the. same. This was such an annoying listen. And I had a few people recommend this one, so it hurts for me to report back to them and say their boy Quavo didn’t bring really anything interesting to the table. There have been talks amongst the fans of Migos to have Quavo make his own album for a few years, and now that we finally have one, I want to throw it in the trash and never have to listen to these below average trap songs ever again. What’s the point of making an album of  tracks that have the same melody, same beat and same rap flow? Quavo could not sound more dull if he tried. Good effort, though.

Why it sucks: The same reason SR3MM sucked, only exceedingly more boring. Aside from “Stir Fry” (thank you, Pharrell), what is so great about this 24-song, hour and a half long project? Please tell me. “Walk It Like I Talk It” might go down as the most uninteresting trap hit of the 2010’s (although the music video is pretty spectacular). And what the hell were these three thinking with songs like “Flooded” or “Emoji A Chain”? I skipped both within 10 seconds of its start on first listen. This one’s tough too though because I do think Takeoff and Offset have a lot of lyrical ability (sorry, Quavious) as they showcased on Culture, but this doesn’t even come close to the standard they set last year.

Why it sucks: Lil Boat. What are we doing here my guy. For a second, I thought this album was okay. I heard some old Lil Yachty, “Minnesota” vibes come through on first listen, but on further inspection, this 15-track quest is just as horrid as his 2017 debut LP, Tennage Emotion. And to be honest, I would’ve put Lil Boat 2 on here as well if I had a bit more room, but this one is definitely the worse of the two. “Yacht World” is kind of a fun collab song with Juice WRLD, but other songs like “Who Want The Smoke?”, “Riley From The Boondocks” or “I’m the Mac” have incredibly annoying choruses. I wish Yachty the best, I really do, but he’s made it on my “Worst Of…” list two years in a row. Hopefully next year he doesn’t make it three.

Why it sucks: What an overblown pile of garbage this thing is. To call Imagine Dragons a “rock band” is such a disservice to the genre. If an album like this is really an indication of where rock music is heading, I’m jumping ship. Quickly.

Why it sucks: Remember when Fall Out Boy was a punk rock band with catchy, angsty teen songs? Listening to this album makes you forget that ever happened. This group used to be on repeat during my middle school years while I thought about maybe talking to a cute girl at school. The “Sugar We’re Goin’ Down” days are long gone, I’m afraid.

Why it sucks: Congratulations, Jared Leto. You’ve managed to release one of the most uninspired, overblown pop-rock albums I’ve heard in the last five years. And what is with the album cover constantly changing to different celebrity names in pop culture..? Do they somehow encompass what America stands for as the album title suggests? Who the hell knows. And what in the world was A$AP Rocky thinking on this collab? You have more dignity than hopping on a garbage pop track; at least, I thought you did. Don’t be fooled by the sonics of this record. They make you feel as though something epic is about to happen at any moment. Nothing epic ever happens. The album just sucks.

These are just my opinions. If you enjoy any of these records, convince me otherwise!