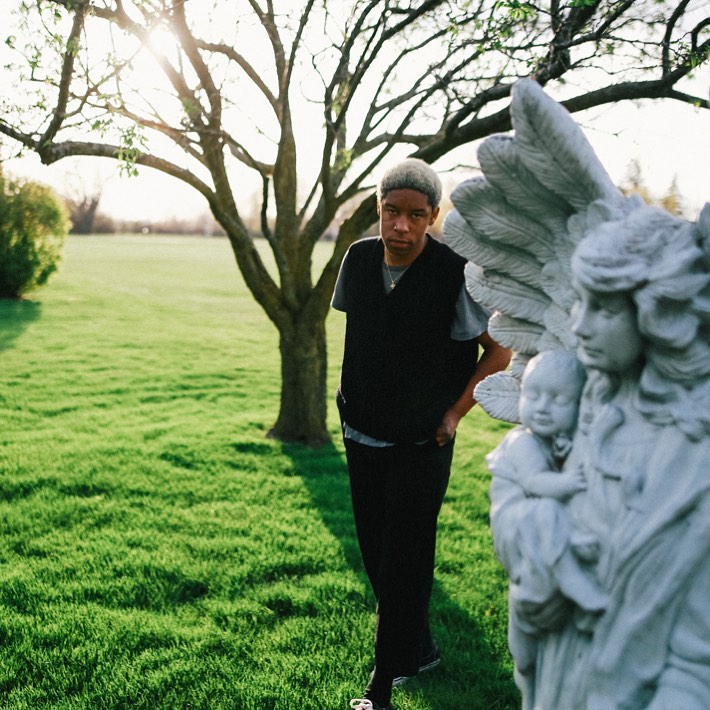 Just around the point at which The Strokes released their landmark record Is This It, Ohio native KennyHoopla was born. For loyal fans of the Indie/Alternative scene that sentence may make them feel quite old, but if there is anyone that carries on the legacy of the 2000’s Indie Garage Rock scene that Julian Casablancas & Co. helped bring to the mainstream, it may be Kenny.

While surely influenced by the spirit of that forgotten era, Kenny, along with fellow despairing crooners such as King Krule, may have what it takes to bring Alternative Rock sensibilities back into mass appeal. His recent EP, how will i rest in peace if I’m buried by a highway?//, sounds nothing like anyone else’s music in 2020.

The EP showcases Kenny’s ability to blend stylistically different approaches to music into one cohesive project. Not many could seamlessly combine electronic drum & bass music with moody alt-R&B and minimal guitar rock, but he does almost effortlessly. There is something extremely modern about how he blends these genres together musically and then combines such unique production with lyrical content built around teenage angst and forlorn dejection.

Themes like these are ever more present in today’s pop landscape, bringing up tangible comparisons to the late XXXTentacion, Billie Eilish, as well as the aforementioned King Krule. Yet while stylistically similar, Kenny may be the most indebted to the 2000’s Indie-Rock era.

Hailing from Cleveland, a city that is not particularly known to the masses for arts & culture, instead being labeled more as a forgotten industry city with nothing to do, Kenny is a “do-it-yourself” embodiment of revival. His music evokes the feeling of being abandoned and left to rot, which may be a representation of his personal experiences, but is also relatable and fitting to his roots.

The next logical step for Kenny, signed by Sony Music Entertainment, will be his debut album, which is still unannounced. With no doubt though, his fan base is growing by the day as his self proclaimed “new wave nostalgia” style has attracted hordes of streams, marked by an ever-growing 367,921 monthly Spotify listeners.

A truly modern artist, KennyHoopla has great potential to be a success story in the music industry. It will be interesting to see his evolution and how he grows in the 2020’s, but there is no doubt that with him it’s just a matter of time.

Check out his latest EP, how will i rest in peace if i’m buried by a highway?//, below.

“VERZUZ” turns from a battle into a new community